What is cyber defense?

As cyber attacks continue to rise in size, frequency, and complexity, cyber defense is one of the most integral and difficult pieces of any organization’s cybersecurity strategy. Cyber defense is a coordinated act of resistance that guards information, systems, and networks from cyber attacks by implementing protective procedures such as firewalls, network detection and response (NDR), endpoint detection and response (EDR) to identify, analyze, and report incidents that occur within a network. Still, cyber defense teams are faced with a near impossible task of securing all an organization’s vulnerabilities, and a big part of that means being able to deeply understand the tactics, capabilities, and motives of attackers.

How has cyber defense evolved?

The beginning of cyber attacks can be traced back to the early 1970s when the first computer worm, CREEPER, was released on the ARPANET. It was quickly followed by REAPER, the first antivirus software, paving the way for the much more sophisticated cyber defense we know today.

As the internet became a ubiquitous part of our daily lives, cyber defense has needed to move at breakneck speed just to keep up. But with each new defense, the enemy created a way around it.

But we can’t keep playing catch up. We need to take a proactive and united approach to cyber defense solutions. The natural next step is Collective Defense.

“IronNet is the only cybersecurity company with the vision — and the technology — to make this Collective Defense approach possible.”
— Tessa Pereira,
CISO C5 Capital

Cybersecurity and cyber defense often get used synonymously. While they are related, there are distinct, important differences.

Cybersecurity is a set of solutions or strategies an organization employs to avoid danger and threats in cyberspace.

Cyber threat defense is a key component of any cybersecurity strategy, which should incorporate cyber offense, compliance, and more. Cyber defense solutions focus on actively resisting an attack.

What does it mean
to transform cybersecurity?

“Where IronNet is really transforming cybersecurity is through our Collective Defense capabilities. This metamorphic approach allows companies and organizations to defend against threats together, and in real time, without the need for known indicators of behavior. No one else in the market is orchestrating this collaborative take on enterprise security.”
Read more

What is active cyber defense?

As it sounds, active cyber defense is using offensive strategies to hinder attack advances. Initially conceived as a component of the Department of Defenses (DoD) approach to cybersecurity operations, active cyber defense was designed to shift the balance of power away from attackers to give defenders a home field advantage during an attack.

The goal is to obfuscate the attacker’s plan, making it harder for them to infiltrate your organization’s applications, networks, and systems and quickly neutralize the threat.

What is a cyber defense matrix?

The matrix has two main components aligned vertically and horizontally on a 5-by-5 grid. The first is the NIST Cybersecurity Framework’s five operational functions: identify, protect, detect, respond, and recover. The second component centers on the assets cyber defense teams need to secure: devices, apps, networks, data, and users. The bottom of the grid is a dependency continuum focused on people, process and technology and how each relates to the NIST operational functions.

The Cyber Defense Matrixis a tool to help CISOs and security leaders make informed, strategic decisions. First determine your organization’s security needs and then map vendors and solutions to the matrix to find the right fit for your team.

How can IronNet strengthen your cyber defense strategy?

Broader visibility of the threat landscape

Threat actors are more sophisticated and organized than ever before, innovating faster than defenders can respond by implementing and varying a wide range of techniques. IronNet uses behavioral analytics based on machine learning and other techniques designed to keep up with the rapid change, giving your SOC team broader visibility of incoming attacks. IronNet’s IronDefense Network Detection and Response draws on behavioral analytics and human insights to detect unknown threats faster for faster response.

The key to minimizing negative impacts of a cyber attack is speed. In reality, during attacks there is little to no time to assess and respond to the situation at your organization, so  trying to share it with others is nearly impossible. That’s why automated information sharing is essential.
By reporting aggregated threat intelligence from individual organizations, critical infrastructures, cities and government entities, organizations can act against a cyber attack at a community level simply and efficiently.  IronNet’s IronDome facilitates collaboration across the sector to create a unified front for cyber defense to stay ahead of evolving threats.

Check out our Collective Defense eBook and learn how you can get a radar-like view of your cyber threat landscape.
Download now

The U.S. government and industry … must arrive at a new social contract of shared responsibility to secure the nation in cyberspace. This ‘collective defense’ in cyberspace requires that the public and private sectors work from a place of truly shared situational awareness and that each leverages its unique comparative advantages for the common defense.”

IronNet’s IronDome facilitates collaboration across the sector to create a unified front for cyber defense to stay ahead of evolving threats.

Take a look at our Collective Defense action plan

A False sense of security
Watch on demand 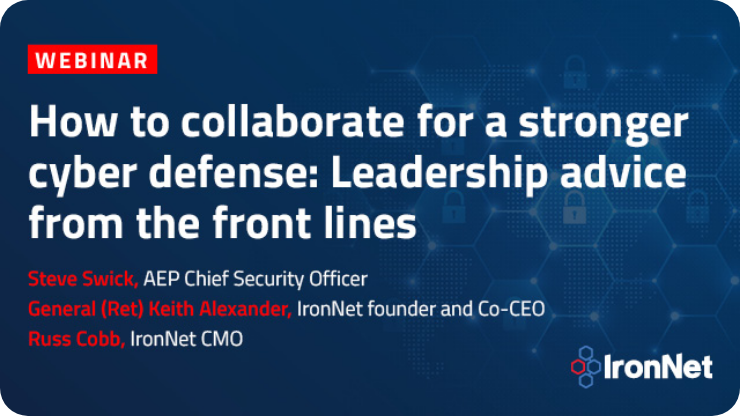 How to collaborate for stronger cyber defense
Watch on demand