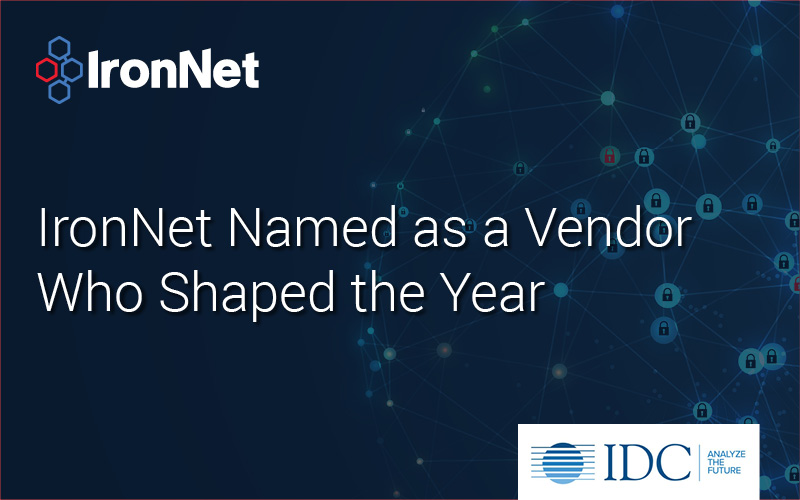 McLean, VA - July 23, 2021 - IronNet, in its mission to transform cybersecurity through Collective Defense, was named a “Vendor Who Shaped the Year” by IDC for the second time in the past twelve months for its ability to detect threats using AI-based behavioral analysis to generate attack intelligence through its unique real-time Collective Defense platform.

IronNet’s Collective Defense platform is the only solution that can identify anomalous (potentially suspicious or malicious) behaviors on computer networks and share this intelligence anonymously and in real time among Collective Defense community members, which may represent a supply chain, business ecosystem, industry, state, or country. The Collective Defense model delivers timely, actionable, and contextual alerts and threat intelligence on attacks targeting enterprise networks, and functions as an early-warning system for all members.

Christopher Kissel, IDC Research Director, Security and Trust Products, wrote, “The IronNet differentiator is its Collective Defense platform that consists of its IronDefense network detection and response and its unique IronDome threat sharing solution that facilitates a crowdsource-like environment.... IronNet addresses the scarcity of security professionals, closing the talent gap with AI-based behavioral analytics that automatically detect and rate alerts.”

This recognition highlights the continued expansion and industry adoption of IronNet’s network detection and response solution — including the ability to integrate behavioral detection and response with additional telemetry data from endpoints, firewalls, and other sources —  and the industry’s leading Collective Defense capabilities, which enable organizations to defend together in real time. It also highlights significant innovation with technology partners — including AWS, Microsoft, CrowdStrike, and Palo Alto Networks — to deliver effective and highly integrated detection and response capabilities that extend how security teams defend their enterprises.

This second designation as a Vendor Who Shaped the Year by IDC builds on additional industry recognition for IronNet. In June, IronNet was named Best Cybersecurity Solution for Public Sector Organizations by AWS as part of the 2021 AWS Global Public Sector Partner Awards, which particularly cited the unique strengths of IronNet’s high-speed Collective Defense capabilities. In February, the Cybersecurity Excellence Awards named IronNet as winners in both the Threat Modeling and Network Traffic Analysis categories as a Cloud/SaaS solution. IronNet continues to expand its presence in the U.S., EMEA, and Asia Pacific regions with penetration into the energy, financial, and Defense Industrial Base sectors.

Founded in 2014 by GEN (Ret.) Keith Alexander, IronNet Cybersecurity is a global cybersecurity leader that is transforming how organizations secure their networks by delivering the first-ever Collective Defense platform operating at scale. Employing a high number of former NSA cybersecurity operators with offensive and defensive cyber experience, IronNet integrates deep tradecraft knowledge into its industry-leading products to solve the most challenging cyber problems facing the world today. In March of 2021, IronNet and LGL Systems Acquisition Corp. (NYSE: DFNS) (“LGL”) announced that they entered into a definitive business combination agreement that will result in IronNet becoming a public company. Upon the closing of the transaction, the combined company will be named “IronNet, Inc.” and is expected to be listed on the New York Stock Exchange and trade under the ticker symbol “IRNT.”

Important Information and Where to Find It

This press release relates to a proposed transaction between LGL Systems Acquisition Corp. (“LGL”) and IronNet Cybersecurity, Inc. (“IronNet”). LGL has filed with the Securities and Exchange Commission (“SEC”) a registration statement on Form S-4 (the “Registration Statement”) that includes a proxy statement to be distributed to LGL’s stockholders in connection with LGL’s solicitation of proxies for the vote by LGL’s stockholders in connection with the proposed business combination and other transactions described in the Registration Statement, as well as a preliminary prospectus relating to the offer of LGL’s securities to be issued to IronNet’s stockholders in connection with the completion of the proposed business combination described in the Registration Statement. After the Registration Statement is declared effective, LGL will mail the definitive proxy statement/prospectus to stockholders of LGL as of a record date to be established for voting on the proposed business combination. LGL also will file other relevant documents from time to time regarding the proposed transaction with the SEC. INVESTORS AND SECURITY HOLDERS OF LGL ARE URGED TO READ THE PRELIMINARY PROXY STATEMENT/PROSPECTUS AND, ONCE AVAILABLE, THE DEFINITIVE PROXY STATEMENT/PROSPECTUS AND OTHER RELEVANT DOCUMENTS THAT HAVE BEEN OR WILL BE FILED BY LGL FROM TIME TO TIME WITH THE SEC CAREFULLY AND IN THEIR ENTIRETY WHEN THEY BECOME AVAILABLE BECAUSE THEY CONTAIN OR WILL CONTAIN IMPORTANT INFORMATION ABOUT THE PROPOSED TRANSACTION. Investors and security holders will be able to obtain free copies of the proxy statement/prospectus and other documents containing important information about LGL and IronNet once such documents are filed with the SEC, through the website maintained by the SEC at http://www.sec.gov. Copies of the documents filed with the SEC by LGL when and if available, can be obtained free of charge on LGL’s website at https://www.dfns.ai or by directing a written request to LGL Systems Acquisition Corp., 165 Liberty St., Suite 220, Reno, NV 89501 or to info@dfnsi.ai.

Participants in the Solicitation

No Offer or Solicitation

This press release includes “forward looking statements” within the meaning of the “safe harbor” provisions of the United States Private Securities Litigation Reform Act of 1995, including, without limitation, statements regarding IronNet’s business combination with LGL. When used in this Report, the words “estimates,” “projected,” “expects,” “anticipates,” “forecasts,” “plans,” “intends,” “believes,” “seeks,” “may,” “will,” “should,” “future,” “propose” and variations of these words or similar expressions (or the negative versions of such words or expressions) are intended to identify forward-looking statements, including statements relating to IronNet’s future financial performance. These forward-looking statements are not guarantees of future performance, conditions or results, and involve a number of known and unknown risks, uncertainties, assumptions and other important factors, many of which are outside LGL’s or IronNet’s management’s control, that could cause actual results or outcomes to differ materially from those discussed in the forward-looking statements. Important factors, among others, that may affect actual results or outcomes include: the inability to complete the transactions contemplated by the proposed business combination; the inability to recognize the anticipated benefits of the proposed business combination, which may be affected by, among other things, the amount of cash available following any redemptions by LGL stockholders; the ability to meet the NYSE’s listing standards following the consummation of the transactions contemplated by the proposed business combination; costs related to the proposed business combination; IronNet’s ability to execute on its plans to develop and market new products and the timing of these development programs; IronNet’s estimates of the size of the markets for its products; the rate and degree of market acceptance of IronNet’s products; the success of other competing technologies that may become available; IronNet’s ability to identify and integrate acquisitions; the performance of IronNet’s products; potential litigation involving LGL or IronNet; and general economic and market conditions impacting demand for IronNet’s products. Other factors include the possibility that the proposed transaction does not close, including due to the failure to receive required security holder approvals, or the failure of other closing conditions. The foregoing list of factors is not exhaustive. You should carefully consider the foregoing factors and the other risks and uncertainties described under the heading “Risk Factors” in the proxy statement/prospectus included in the Registration Statement, LGL’s Annual Report on Form 10-K (as amended), Quarterly Reports on Form 10-Q, and other documents filed by LGL from time to time with the SEC. These filings identify and address other important risks and uncertainties that could cause actual events and results to differ materially from those contained in the forward-looking statements. Forward-looking statements speak only as of the date they are made. Readers are cautioned not to put undue reliance on forward-looking statements, and neither LGL nor IronNet undertake any obligation to update or revise any forward-looking statements, whether as a result of new information, future events or otherwise, except as required by law.

Founded in 2014 by GEN (Ret.) Keith Alexander, IronNet, Inc. (NYSE: IRNT) is a global cybersecurity leader that is transforming how organizations secure their networks by delivering the first-ever Collective Defense platform operating at scale. Employing a number of former NSA cybersecurity operators with offensive and defensive cyber experience, IronNet integrates deep tradecraft knowledge into its industry-leading products to solve the most challenging cyber problems facing the world today.
Back to IronNet News