Back to Webinars
OnDemand 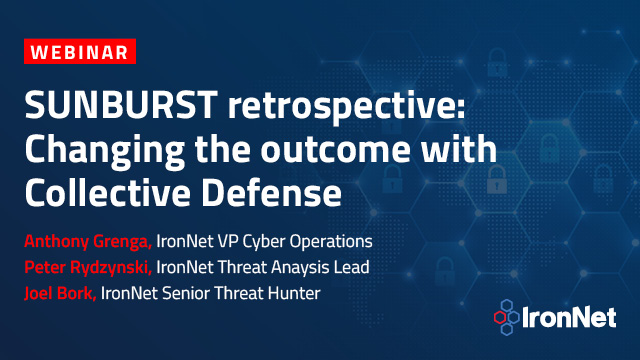 Unless you’re living off the grid, you’ve heard of the SUNBURST attack by an elite Russian adversary that affected more than 18,000 companies. The 18,000 companies worked individually to protect their network. Imagine now, if security analysts for these companies had been working together at network speed and sharing crowdsourced knowledge, leveraging their collective expertise to defend themselves, their industries, and the nation. The end results would likely be very different.

IronNet first detected the initial SUNBURST behaviour months ago on May 31st 2020, in near real-time on a customer’s network. The intel was correlated and shared into IronDome, IronNet’s Collective Defense platform that significantly increases IronNet’s customers’ ability to detect threats and take actionable steps. Join IronNet’s cyber operations experts Anthony Grenga, Joel Bork and Peter Rydzynski to unpack the latest and ongoing analysis of this egregious attack, and learn how you can stand a chance against future threats.